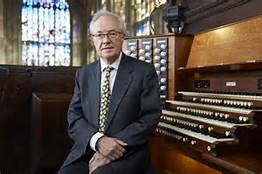 For most of us, our closest connection with Stephen Cleobury was on Christmas Eve as we completed our Christmas present wrapping and cooked those mince pies.

For millions across the globe, this was all done while enjoying the annual feast of music that is the world-famous Service of Nine Lessons & Carols from King’s College Chapel Cambridge. Christmas begins for many of us at 3.00pm on Christmas Eve. Director of Music Stephen Cleobury, who passed away on 22 November aged 70, and his King’s Choristers had become associated with our Christmas music through their carefully crafted Services, maintaining the precious King’s tradition and shared with the widest possible listening and televised audience. Joy for us, but a punishing schedule for him and the choir. While the anonymity of the Lesson Readers is a hallmark of this Service, Stephen’s voice could be identified clearly as he read his Lesson, accompanied by the stellar performances of the King’s Choristers and Choral Scholars he trained and directed, as they sang familiar carols and the innovatory new commissions that brightly coloured a term of office lasting nearly four decades. That is how many will remember him…..but there was much more to Stephen than this. He cast the conducting net widely to include a critically acclaimed period with the BBC Singers for example. Guest conducting and Honorary roles completed an annual diary of engagements, the volume from which many might flinch. Not least for us in LBS, and what many might not know, was his participation as organ continuo in the final concert of our historic Bach Cantata cycle in December 1987.

Numerous Obituaries will be published in the musical press and beyond, but I have just cause to pay tribute to our friend and colleague who staunchly assisted me in the immediate aftermath of Paul Steinitz’s death in 1988. Stephen, originally engaged as organ continuo, also stepped in when Paul was taken ill, and after his death he stepped in again to direct a previously booked engagement for our orchestra to take part in a private but important concert at the Royal Postgraduate Medical School Conferment of Honorary Fellowships a few days later.   As the LBS moved forward and the annual Bach Festival took its first tentative steps in a new era, it was musicians order tramadol like Stephen who wanted to participate and he performed a beautifully created organ recital playing the Rieger Organ in St. Marylebone Parish Church. Later it was my pleasure to introduce Stephen to Leipzig’s Thomanerchor who invited him and King’s Choir to perform at their 800th anniversary celebrations in the Thomaskirche in March 2012.   I remember them processing into the church, the beautiful performance just in front of Bach’s grave and the prolonged  applause from the packed audience in the composer’s city.

What does all this tell us about Stephen Cleobury, organist, conductor, composer, teacher?  He occupied the most prestigious of all music posts, not only in this country but internationally. However Stephen’s enquiring mind and commitment to music inspired him to do whatever he could to take a lead, facilitate and serve beyond Cambridge. His life in music brought him into contact with many prominent musicians in past generations and in very different times too. For example, as Secretary of the Royal College of Organists (later President), he was highly respected as an administrator by Dr William Cole LVO  (1909-1997) who at the time was RCO Treasurer and also Chief Examiner at the Associated Board of the Royal Schools of Music. He spoke of Stephen’s unfailing courtesy, a quality which so many will recognise today.

On Stephen’s retirement this year, honours and thanks have rightly abounded. These ranged from a Knighthood in the 2019 Birthday Honours to reunions with former choral scholars and colleagues going back 40 years. I last saw him in June 2019 when Stephen, accompanied by his wife Emma, attended the Midsummer Banquet of the Worshipful Company of Musicians in Stationers Hall and received the Company’s Lifetime Achievement Award in Choral Direction, in front of the St Cecilia’s window directly opposite the top table.  Together over a drink we also enjoyed a lively conversation. So glad to have had that now.  A ‘thank you’ letter from Stephen arrived a few weeks later.

Stephen’s successor as Director of Music at King’s is Daniel Hyde, a former King’s organ scholar, Director of Music at Magdalen College Oxford and St. Thomas’ Fifth Avenue New York. The daily life of this famous institution goes on.  My thoughts are with Emma, Lady Cleobury and his family. We send them our sincerest condolences.